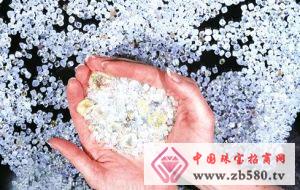 Diamonds, the world's recognized exotic treasures. It is often given as a national gift. Diamonds not only symbolize wealth, but also symbolize loyal love. Walking into the Diamond Museum of the Moscow Kremlin, it was an eye-opener. Here people find that Russia is not only a major oil and gas country, but also a major diamond producer.

There are only a handful of museums in the world that have not been stolen, and the Russian Diamond Museum has never been stolen for 300 years. The Diamond Fund Library was built during the time of Peter the Great. Peter the Great issued a decree to establish a diamond hall and collect royal treasures. During the Russian period, most of the treasures were purchased by the state, and some were gifts from foreign countries. In addition to the royal crown representing the imperial power, the emperor's scepter, and the golden ball, there are a large number of high-end jewellery used by the wealthy aristocrats of the secular society. A considerable portion of the Diamond Hall collection was collected in the 18th century. The Empresses, Elizabeth and Ekaterina II, have a hobby of collecting exotic treasures. Among the myriad of rare stones, diamonds dominate. Therefore, future generations even called the 18th century a diamond century. At the beginning of the First World War, the treasures of the Diamond Hall were loaded into eight boxes and transported from Petersburg to Moscow. According to the 1915 estimate, the total value of the Diamond Hallâ€™s treasures is 1 billion rubles. This was an astronomical number at the time.

Many of the collections in the Diamond Museum have a legendary experience. There is a delicate gold bracelet in the exhibition, decorated with various jewels and gold ornaments. The center of the bracelet is inlaid with the full body image of Tsar Alexander wearing a military uniform. The tsar royal photo is embedded in a piece of "glass". But that is not glass, but a thin diamond, worth the price. The museum has a diamond called "King" weighing 88.70 carats. Its color is yellowish, crystal-clear, and basically maintains its natural shape, but the upper part is slightly honed for the convenience of wearing a string. Some collections are not known for their legendary history, but because they are precious and shocking. For example, the Diamond Museum houses the world's largest precious peridot, weighing 192.60 carats; and Ceylon sapphires weighing 258.18 carats. The most important treasure was the crown made by Catherine I in 1762. This crown is basically inlaid with diamonds and pearls, and only one piece of ruby â€‹â€‹inlaid on it has 398.72 carats.

Russia has more than 600 diamond-honoring companies that process nearly $800 million worth of diamond products each year, 90% of which are exported because there is no market in the country. Due to low domestic purchasing power, the price of diamonds in the Russian domestic market is usually 30% lower than the international market. Diamonds are now very popular in the world market. There are hundreds of standards for evaluating the quality of diamonds. Normally, colorless and transparent diamonds are the most precious, while colored or black diamonds are not. But now even black diamonds are very popular.

There are many different kinds of pillar candles as described above, the categorization is done on the basis of shape, wick,materials and scent.

It is cylindrical in shape, having a single wick.  It is made of paraffin or beeswax, having different colors. It can be decorated on the dining tables.

As the name suggests the candle is made of soy and some other components which help to give the stability to the candle. They are quite eco-friendly and burn much hotter than the conventional candles.

These candles are quite similar to basic candles, but have layers of different colors in its wax.It is best to use for decoration purpose as it can give quite a dramatic affects in the room.

This name to these pillar candles is given due to its formation technique, as ice is used to make these candles and while burning it creates an enchanting lighting pattern.

This candle is quite opposite to the conventional candle as there is no melting of wax or the burning of wick. It is also called as the flame less candles. It is purely used for the purpose of decoration and home designing.